The object was done in June 2009, on the occasion of the annual urban culture event on Arthur Verona Street, entitled Street Delivery #4. In June 2010, at Street Delivery #5, the object received a new wrapping, formed through the lamination of a layer of newspaper pages, books and black and white comics. (www.streetdelivery.ro). The intervention in the public space was initiated by Mirela Duculescu and supported by architect Şerban Sturdza and the Romanian Order of Architects. The action was replayed in 2011 at Street Delivery #6.

A linear, discrete intervention, the bench is placed at the non-conflictual limit between the inaccessible legal green square and the abusive parking spot on the alley, using the existing elements: it sits on the concrete curb and is tied to the metal fence. The backrests recall an image specific to a bookstore, suggesting a rack of books viewed from the side. The structure of the bench consists of wooden planks, and the covering is made of Tego left apparent (it is a material used for concrete forms, and in this case because of its resistance to weather conditions and acts of vandalism). 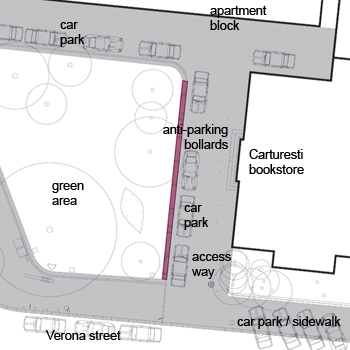 Everyone involved in the project showed their skepticism in respect of the chances of survival of such intervention in the long run, the on the-spot situation generating a permanent conflict between the cars of the locals, parked aggressively and illegally, and the visitors of the bookstore, suffocated by the lack of any relation with the green area and of any seating places. Our strategy consisted in a “performative” take on things: we did not make any presumptions about what would follow and anticipated the dynamic of the conflict through an intervention.

Surprise: due to the non-conflictual nature of the area in which we placed the bench (it was not a street or a square or a sidewalk), the two irreconcilable states have peacefully co-existed since June 2009, since the practical needs of the drivers, i.e. that the space required to be able to open the car door be at least equal with the minimum distance that a person needs to be able to sit down with the knees between the car and the bench, were met; thus, the object led to a temporary armistice, a tacit understanding.

On the occasion of the Street Delivery event in 2010, we covered the bench in laminated pages taken from magazines, books and comics, action inspired from Bucharest’s reality. The palimpsest finishing was executed throughout the duration of the event, like a performance-manifest. 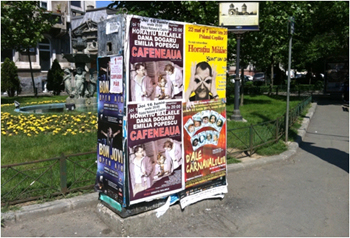 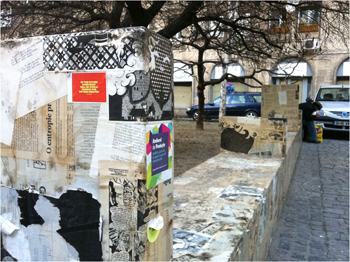 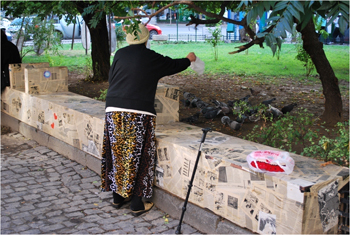 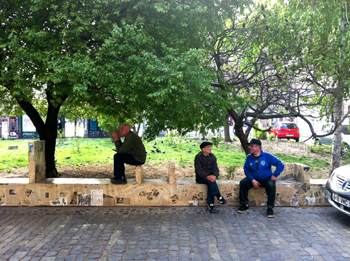 At the end of 2010, the access alley was renovated, and the bench, because of its position between the alley and the green area, survived untouched by the authorities. 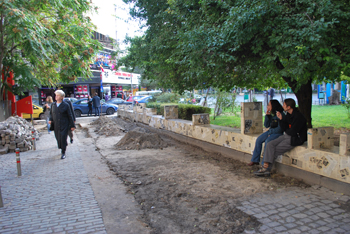 After the rehabilitation of the acces road, the architect Serban Sturdza together with Carturesti Bookstore installed 5 seating benches on the limit of the propriety, making more difficult, even impossible, the parking of cars on the acces road in fron of the bookstore. 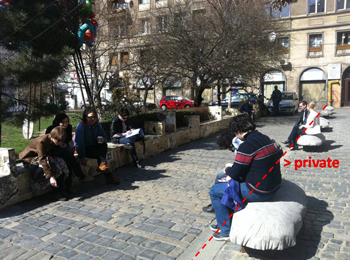 In the framework of Street Delivery 2011 we rehabilitated the Letter Bench together with numerous volunteers, we covered again the bench in paper color materials, partially collected from the event.