The installation was done in June 2010, on the occasion of Street Delivery #5, the annual urban culture event on Arthur Verona Street. (www.streetdelivery.ro)

The intervention in the public space was initiated by Mirela Duculescu and supported by architect Şerban Sturdza and the Order of Architects of Romania.

The site of the intervention consisted in a corner pillar belonging to the fence of Cărtureşti bookstore, a parking metal pillar and the space in between such.

The requirements of the theme - an urban signal for the Street Delivery event, but also the special location - the former entrance to the property (the house used to be a private residence, the pioneers’ centre, a bookstore, a tea house), determined an intervention of the type figurative TOTEM with a multi-purpose role.

Covering the fence pillar and propped by the metal pipe, the installation object cumulated four functions: cage for a dog (a stray dog or a watch dog), a street advertising board (the original pillar and the car traffic sign already pointed to this urban need), informative plate (a signaling arrow marking the start of the Verona street’s pedestrian portion) and collective bird cribs. 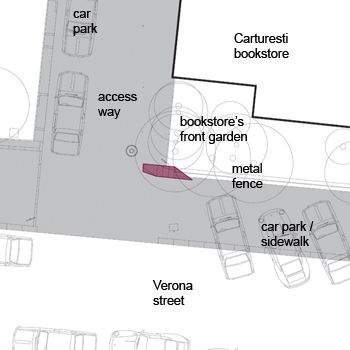 The structure was quickly referred to by the work team as “Pupăza din Tei” [the Hoopoe in the Lime Tree] (as the boards were carved in a workshop in Lacul Tei district).

Thus, the intervention started its act as an urban mascot, and is programmed to be relocated, in the future, to a nearby school, where the pupils will take hold of it.