In the last years we had been invited in the framework of the street culture festival Street Delivery with contextual installations, perishable, temporary but permanent, that were aiming to activate the public space beyond the three days of the festival. The Totem from 2010 marked the Verona’s street corner for six months, and the Letter Bench is constantly deposing emerging public space in front of Carturesti bookstore for the last three years. 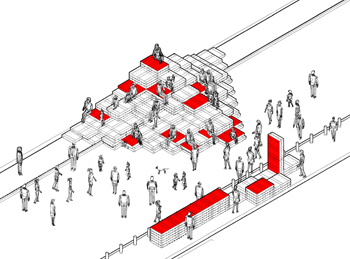 The intervention from 2011 took as a context the urban street festival: a public time when the city is under temporary rules by suspending traditional restrictions and replacing them with liberties often excessive. 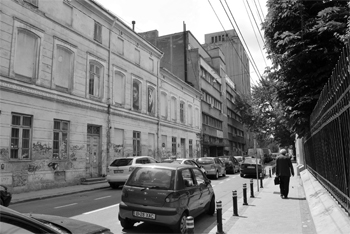 We choose the street as a character that participates in the carnival and gets transformed, it exits the everyday time and it investigates the alternatives to the linear functional logic and serving the street fronts. 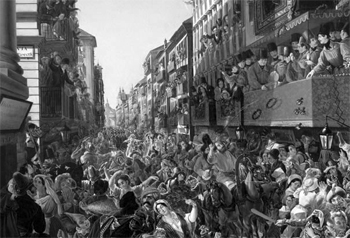 The cities have moments of exit from the everyday time similar to the state of carnival. There are those exceptional time moments when the use of streets is suspended and the space around the buildings is radically but temporary transformed: when the nature’s actions, heavy snow or torrential rain, or social upheavals, get to manifest in the city as barricades, obstructions or occupancy.

Out of the memory of such a moments the Pyramid of G. gets its references: at the crossroad between the ruin of a pyramid and a pile of ruble or frozen snow, or between a barricade’s row and the turnover of a truck loaded with euro pallets, the Pyramid of G. doesn’t want to solve a problem, but rather to provoke a temporary vision: a landscape-installation as an obstacle that blocks the street, a functional outgrown on the street natural course. The Pyramid of Garguromin borrows the second middle name from the painter Arthur (Garguromin) Verona that gave the name of the street where the festival is on, but didn’t make it on the street name plaque of the municipality.

During three days the Pyramid of G. has been acting as a support structure for a range of activities, as being the only seating place around the area, to a music and theater stage, playground for kids, high point for observation, photo corner or even improvised stand for the ones not officially registered as participating in the festival.