‘Urban Spaces in Action’ represent an interdisciplinary initiatives that started in May 2014 that will end in October 2015. The project is coordinated by Komunitas Association, in the partnership with the Direction of Sport and Youth of the Municipality of Bucharest, tranzit.ro Association, ArtWe Association and supported by the group of architects studioBASAR. Urban Spaces in Action is financed by SEE 2009-2014 grants, within the ONG Fund in Romania. For official information about SEE and Norwegian grants, go to www.eeagrants.org, www.fondong.fdsc.ro.

‘Urban spaces in action’ is a pilot project initiated by a multidisciplinary team composed of architects, urban planners, social anthropologists and teachers. The project aims to act on different complementary plans: researching and better understanding the 3 selected Bucharest’s neighborhoods and the way inhabitants relate to them, but also the dynamics of the public spaces; the activation of several public spaces trough urban interventions and community events; the educational enterprise to develop new abilities and ways of relate to the city by the youngsters, trough non-formal actions of urban pedagogy undertaken in 3 schools and 2 high schools from Bucharest. (Komunitas Association) 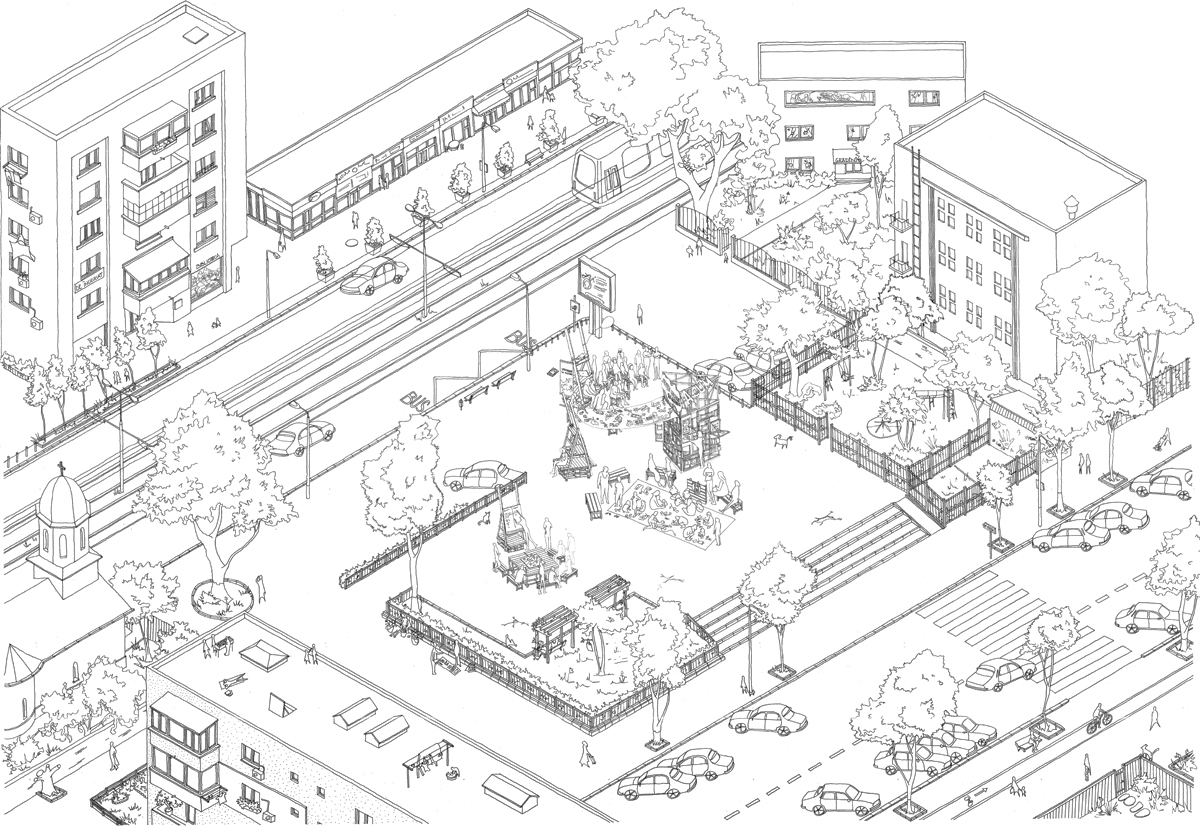 Bucharest is a city where over large areas that are accommodating the majority of its population, the modernist project of radical reshaping the collective living was dubbed by the social engineering of the communist project to create the new man. Both projects have treated the space among the blocks of flats as a backdrop, as a utilitarian and transitory territory. In the past 25 years over this inheritance, a superficial and decorative layer as wave of interventions as standardized as the initial project was laid-down by the administration, which is preoccupied just by the buildings in a process that postpones the moral rehabilitation of the space in-between the buildings. This space is more a technical space and less a community resource. 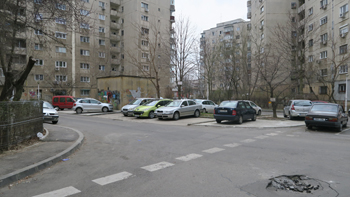 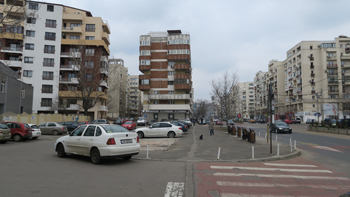 In this context, we decided to address this chronic lack of public space, in its physical dimension and as well as in its social one. The old windows thrown away in front of the flats after replacing them with new double galzed ones have been collected from different neighborhoods and re-assembled into a support structure, where the identity and the memory of their neighborhood have found its place and its public. Borrowing from the looks of the commercial totems and learning from the intuition of the strategic emplacement of the neighborhood kiosks, AcUM is a pavilion that trough its activities supports and investigates the structure and the dynamic of the local public space. Built in a week by the collective effort of a team of volunteer students of architecture and urbanism, AcUM formulated on spot the intentions of the project and temporary transformed, with local resources, the public domain, including the inhabitants into the production of public space. Made from detachable panels, the Accumulator loaded in a truck from the yard of our host, the gallery tranzit.ro/Bucharest and transported in the neighborhoods, where the team of volunteers installed it in couple of hours. All this process of unloading, setting and assembly became an extention of the construction workshop transferred into the neighborhood. 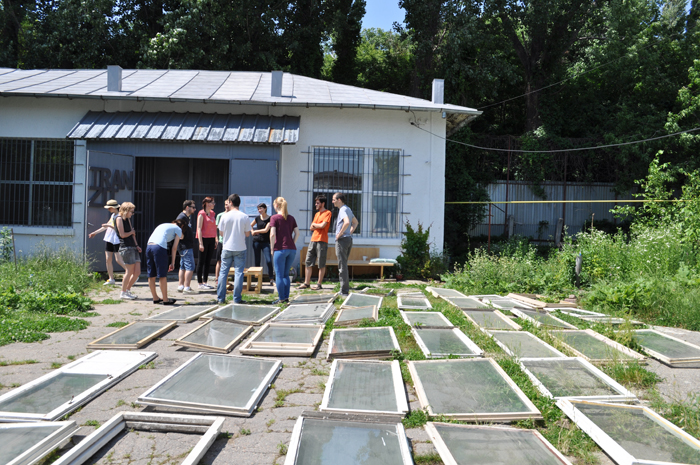 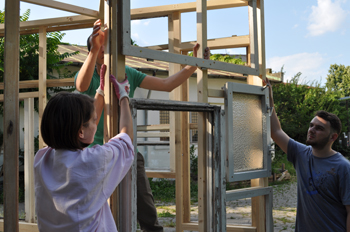 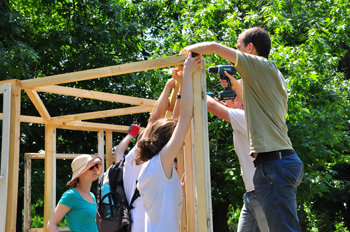 AcUM in the neighborhoods

The three neighborhoods - Tei, Tineretului and Timpuri Noi - share together the same utilitarian characteristics of their public domain, but are also having specific differences coming from the geography of the city, the Accumulator being projected to blend and easily adapt to Bucharest’s context. Set in landmark places for the local geography of the neighborhoods - in Tei neighborhood in front of a postal office, in Tineretului neighborhood near a church and in Timpuri Noi by a school entrance - AcUM worked for few days as a in-place research instrument, but also as a tool of testing the transformation potential of the place. All three placements hardly found a spot in pockets along boulevards as compact corridors made from blocks of flats, where the public space is already occupied, contested and consumed. AcUM transformed in Tei neighborhood a passing space to the back court into a stop-over, in Tineretului neighborhood it activated a partially green but fenced square and in Timpuri Noi neighborhood it change two informal parking spaces into an attraction point. By employing free activities, non-formal urban education workshops, exhibitions about the memory of the place, debates about both the problems and the potential of the neighborhood, expeditions through the history and geography of the area, or by film projections, the Accumulator supported by the modules of the Toolbox, gathered information, communicated with the public, tested in real time the activation techniques for public space activation and worked for a couple of days as a place to meet, to share memories, opinions or plans for the future. 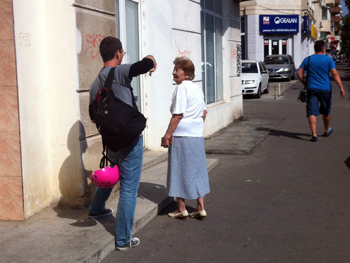 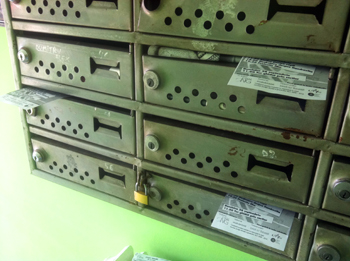 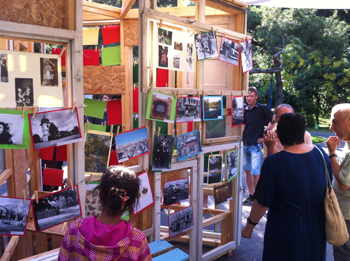 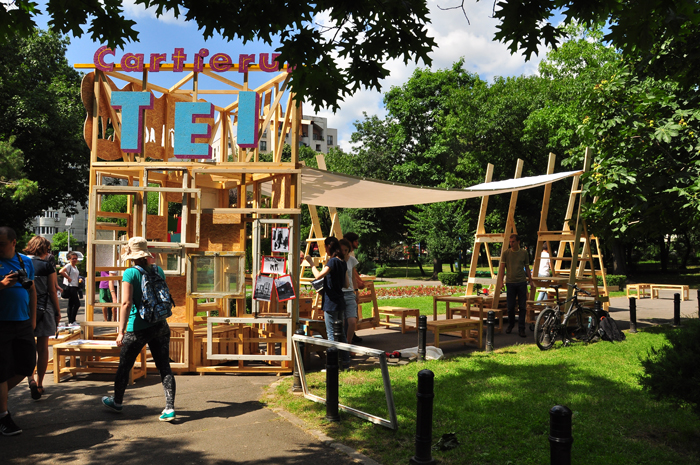 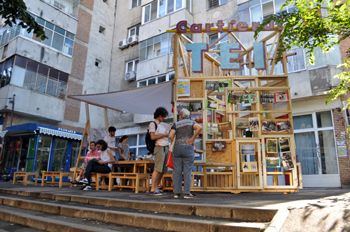 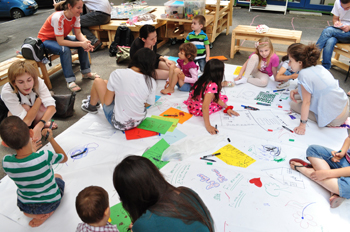 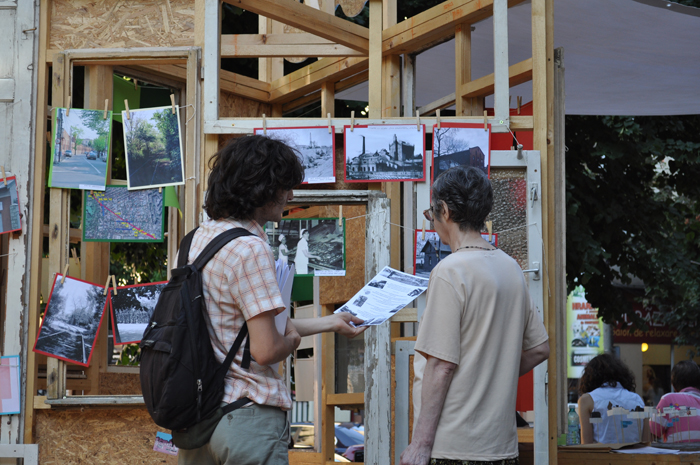 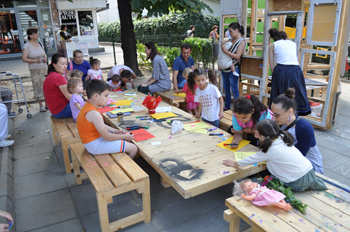 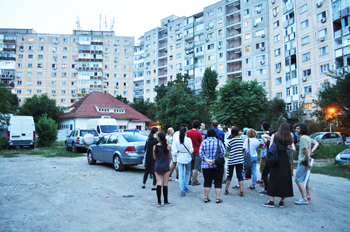 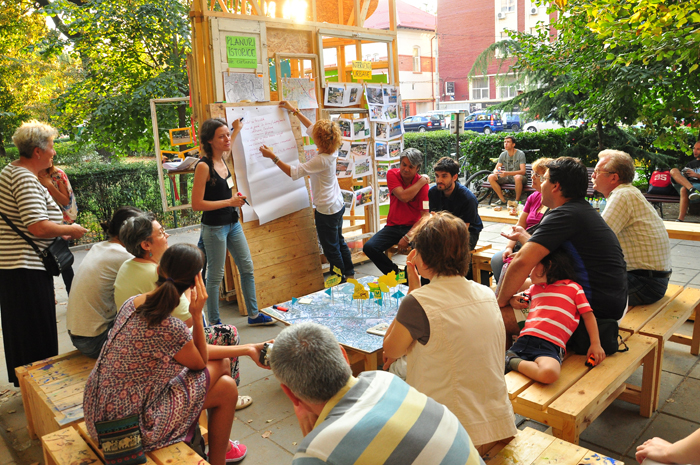