With the support of: Studioplot

“City School 2015-2016: The Library from Militari” is an applied education program coordinated by studioBASAR and financed through the Mobilizing Excellency Program, created by Porsche Romania and developed together with Bucharest Community Foundation.

After 9 months since the official reopening of the “Gheorghe Lazăr” library during 2015-2016 edition, “City School” returns in Militari neighbourhood where it aims to identify, regain and transform a public space, intended for the neighbourhood, which can stimulates the participation of the participants and seeks to be assumed and cared by them after the project finishes. For the second consecutive year, during 2nd semester of 2016-2017 academic year, the library became a classroom for 23 students from Architecture and Sociology, to whom the applied education process was part of their academic curricula. The participants passed from mapping actions, research and consultation where they tried to grasp the “life of the area”, through ideas workshop, hands-on self-construction and landscape workshops that took place within the neighbourhood. 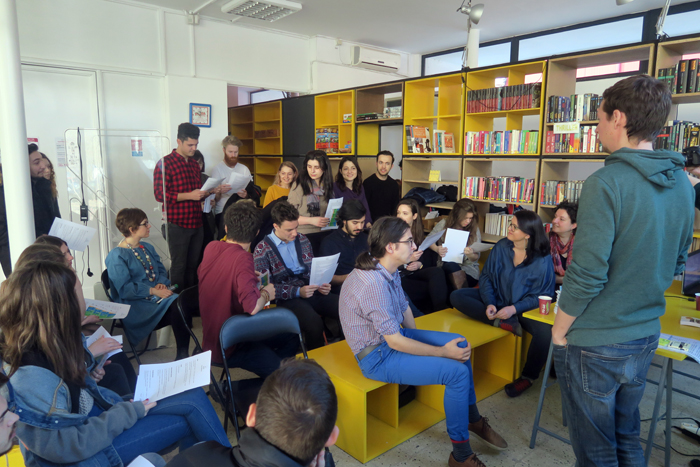 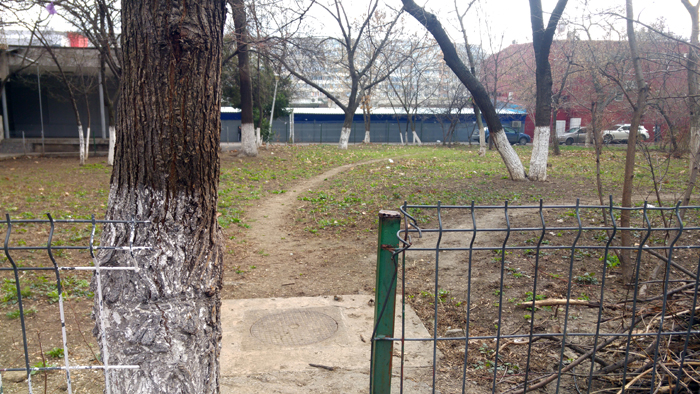 The botanical garden between the blocks of flats

The School went out of the library through a landscape workshop that aimed to investigate the potential of the green space in the area to become a place for experimentation and learning. In the first stage, the participants acted on the ground, where, together with children or grown-ups, they planted bed flowers and scrubs and dispersed seeds in the block’s garden. In the second stage, the green area near the library was mapped and assessed, providing to the inhabitants information about the stocking and management of the space, all accessible by the library under a format of a “Green (mini)Index”. 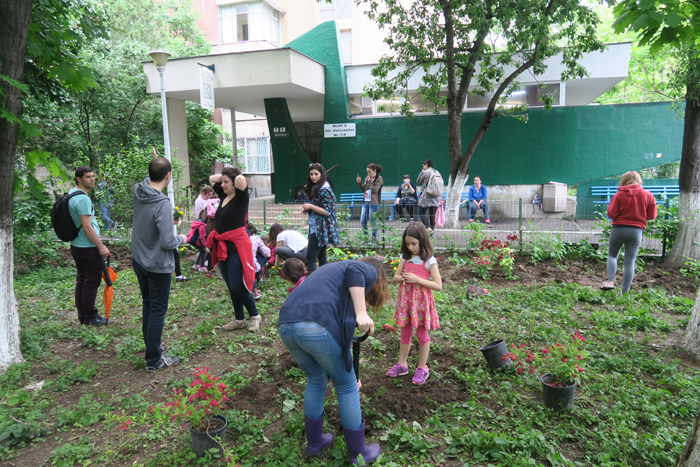 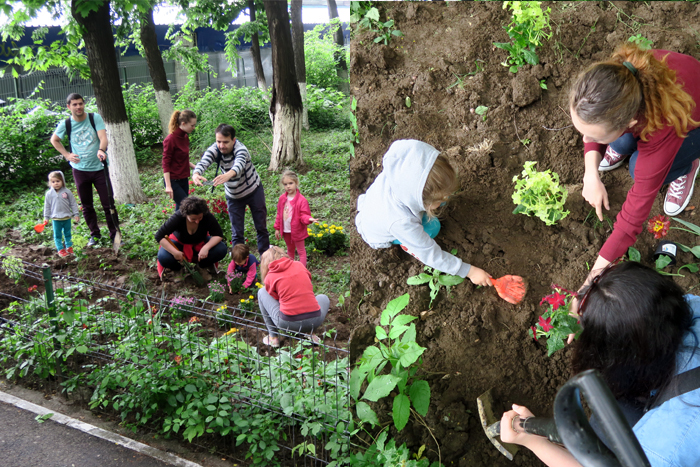 Following the consecutive stages of mapping, selection and consultation, two locations emerged. These represent typologies of spaces specific to the collective housing neighbourhoods: first one, on the sidewalk near the “George Topîrceanu” library, and the second one within the garden attached to a nearby block of flats. The self-construction stage faced the team of the School with the realities of the material and team work, having to deal with the ever surprising conditions of a real location and with the necessity of professional liability in the relation with the direct users. Beyond the built form, the crystallization of the process generated among the actors a new set of collaborative protocols associated with the intervention. 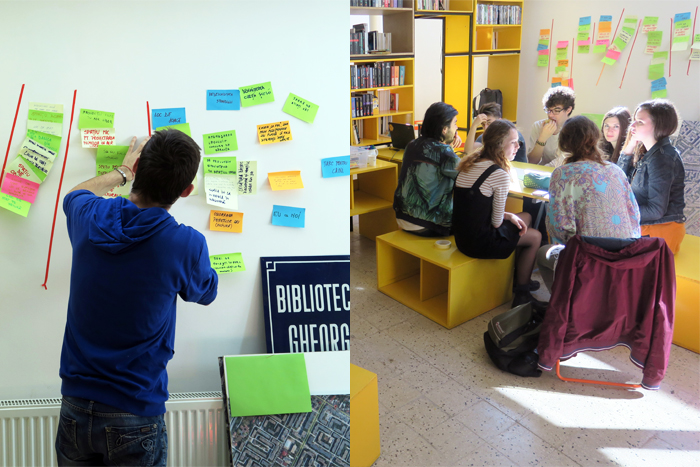 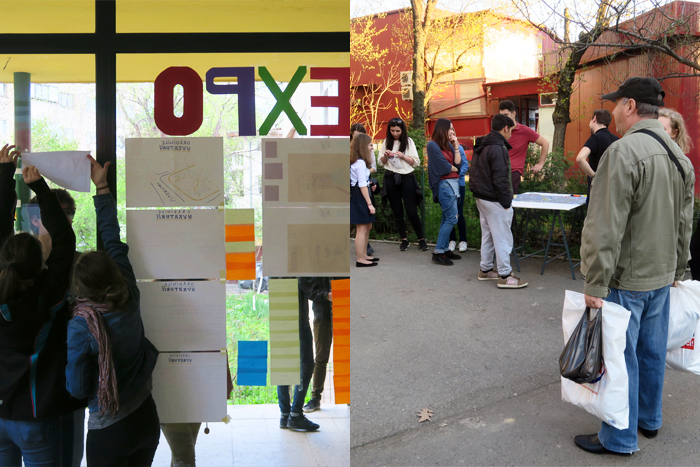 The intervention started from the question: “How to open the green spaces in between the blocks of flats without destroying them? And to whom?”. The scenario grew in successive stages of research, ideas workshop and consultation, until it reached the agreement among the tenant’s association and local administration. Beyond its open function towards diverse uses, like seating place, playground or meeting place, the controlled opening of a corner from a green space towards the area’s inhabitants, but as well as to the passersby from the boulevard and to the tenant’s association (which is supposed to groom the place and manage the garbage bin), stands as an experiment for all sides involved. 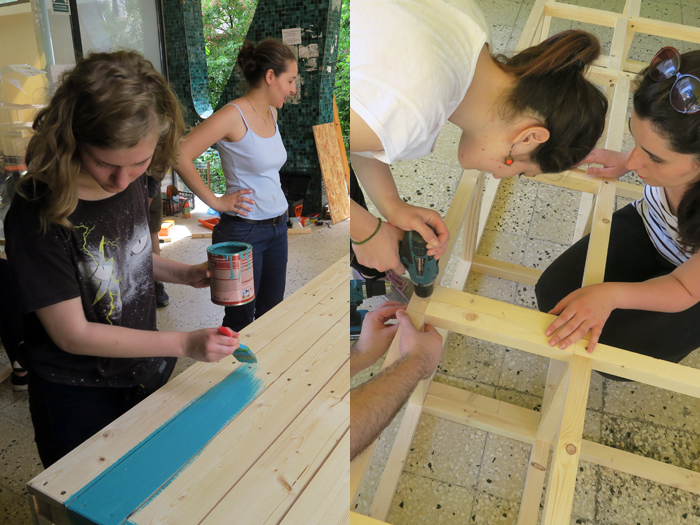 The intervention scenario started from the “George Topîrceanu” library’s need for visibility and openness towards the community. Combined with the spatial resource of underused public space, the intervention transformed a closed space into a playground open air library, a space for activities but also a social space for the neighbours. The project stays open, the access is still controlled (closed for the night), but the maintenance of the infrastructure (shared among the library, the tenant’s association and district administration) can work as a test for local collaboration. 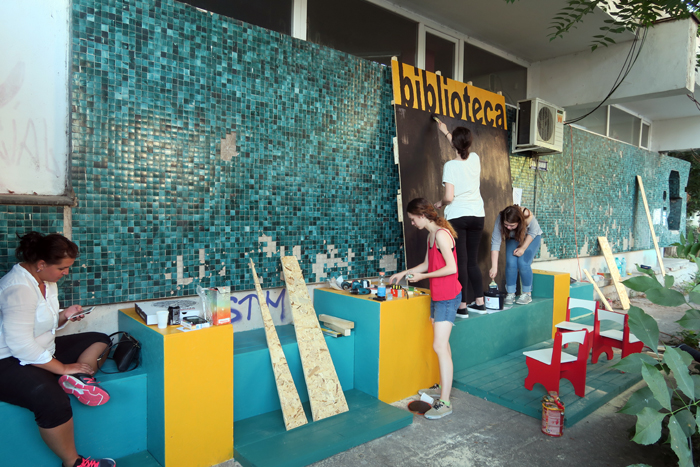 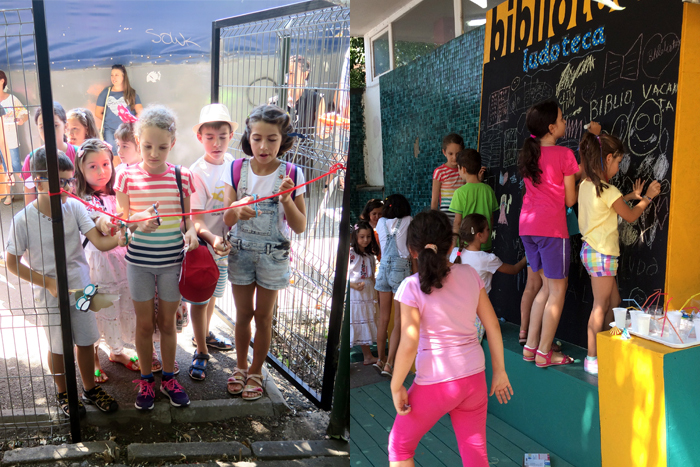 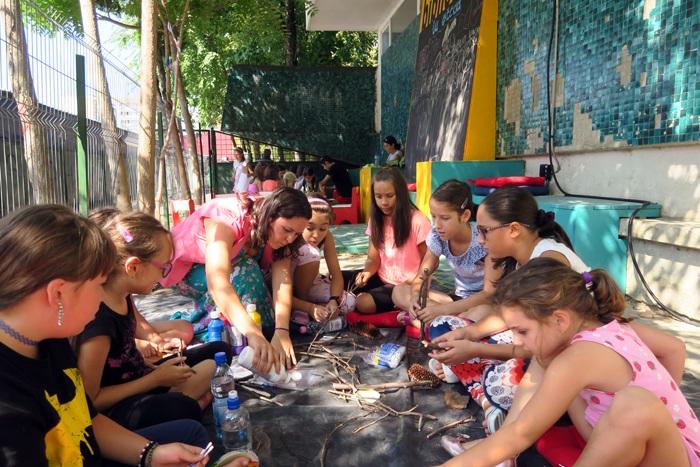