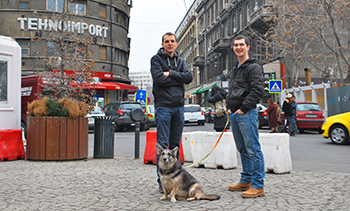 studioBASAR is a Bucharest based architectural studio and a public space practice founded in 2006 by Alex Axinte and Cristi Borcan. Preoccupied with the dynamics of urban culture and the disappearing importance of public spaces, studioBASAR initiates and develops actions and projects within public space. Ranging from temporary to permanent, these processes include practice based research, participatory action research, community activation, co-production and co-design, urban design, live education and civic pedagogy.

In 2010 studioBASAR published the book EVICTING THE GHOST. ARCHITECTURES OF SURVIVAL (P+4 Publications), and in 2016 they were curators of ONE ARCHITECTURE WEEK in Plovdiv, Bulgaria. In 2009 studioBASAR did the exhibition design for THE SEDUCTIVENESS OF THE INTERVAL project as the Romanian Pavilion at the Art Biennale in Venice, and in 2014, the project PUBLIC BATH was finalist at European Prize for Urban Public Space.

In 2017 studioBASAR was one of the honorees of SOCIAL DESIGN CIRCLE awarded by Curry Stone Design Prize.

Previously part of the team: